Well, its been almost a year since the last blog, but we know everyone is anxious to see pics from the new house and all the renovations.

When looking for houses we definitely had something in mind and soon found out it would require some work on our end to make it happen. So the house we bought was actually the 2nd house we ever looked at here in Denver. We thought it required too much work despite how great of shape the overall house was in. After months of searching we came back to the Rosemary house and decided to make an offer!


We closed on the house in November and started demolition on the first floor the very next day! After a few weeks of mocking up floor plans and working with our contractors, Terence finally designed something that we loved and worked in our budget. We started with the first floor of the house wanting to create a more open floor plan and to expand the kitchen. We also updated the half bath, moved the laundry room to the basement, tore down the ugly green wallpaper and cork board/mirror wall, and replaced all the trim.

Luckily behind those three dusty layers of window treatments throughout the house there were bright, new windows. We did have to replace the flooring and decided to go with a natural red oak throughout the first floor.

Besides the major work we did, Terence and I are now busy tearing down the rest of the wallpaper and painting the upstairs.

Hope you enjoy the pics! 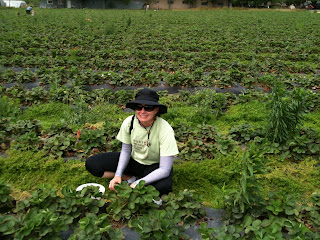 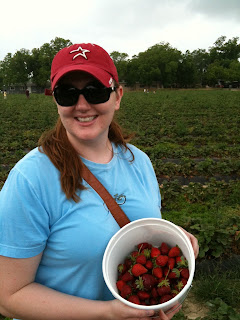 Taking a small detour from the vacation catchups....
For Terence's birthday this year we decided to run the Great Urban Race in Houston, ON his birthday (how perfect is that timing)!

In case you don't know what the Great Urban Race is... it is similar to the TV show The Amazing Race. Each team is given 12 clues to solve that require you to solve puzzles, perform challenges, and physically run your heart out in the city of your choice. 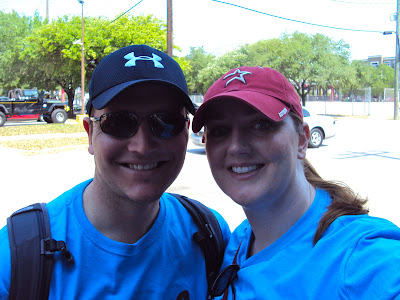 I made us some team shirts...had to represent Kiddy and Roma with Team Kadlec! Original, I know :-)
The race kicked off at Lucky's Pub in downtown Houston, everyone received their clues at noon and we're off. Our strategy...was to stay there, solve the clues, devise a plan, and figure out how the heck the Houston bus system works. We definitely didn't prepare enough for the race, who would have thought they would have us running all the way out to the Chocolate Bar! 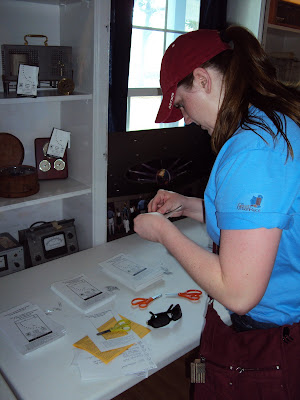 After solving the clues, thank goodness for iPhones, we headed straight for the MetroRail and headed down to Hermann Park. We had to get to the Houston Weather Research Center to make an anemometer as proof of completion. Next we headed to the Lawndale Art Center to meet the Chipotle sponsors. I had to make a paper airplane (Terence coached me while on the Metro), then he had to fly it into a Chipotle target, two free burrito coupons as the reward! Woohoo Chipotle! 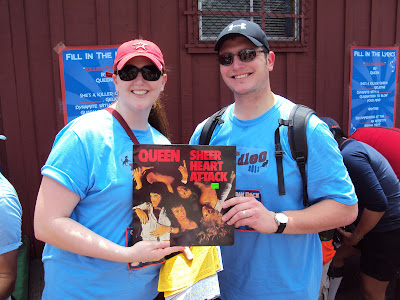 Next we knew we needed to get to a mile and half down Richmond, so we started hauling it, but like a mirage in the distance there was a bus. We started sprinting across an abandoned parking lot, holding our hands out to the opposing traffic, running across Richmond and hopped on the bus. We took it all the way out to a music shop where we  had to guess the lyrics to a popular song, then we walked to the Chocolate Shop. Took pictures of us feeding cupcakes to each other and then back down to Ervan Chew Park to learn some belly dancing. Sorry no pics of that! 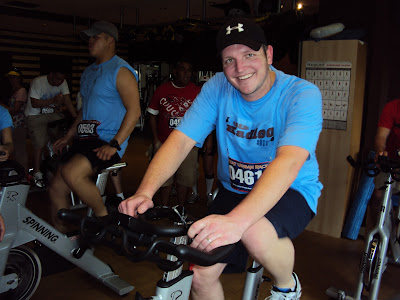 Next we hiked it back down Richmond to CVS where we met the Houston Food Bank, we donated a few items and were on our way to the Timberline Fitness Center. Terence hopped on a stationary bike and went to the distance of an alegrba solution that we had solved earlier. We took a picture and headed over to St. Dane's bar to shoot some hoops. 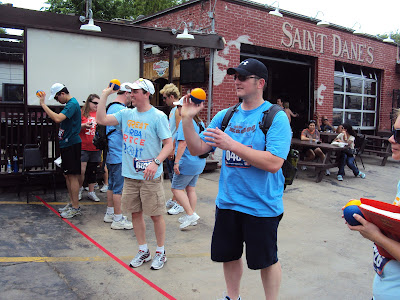 After making a basket, we stopped at a Florist for some arts and crafts time. We made a rose out of tissue paper and a pipe cleaner we were off to the House of Dereon Media center. We got to load up on tons of promo CD's (glad we went towards the end of the day) and our last location was at Aerosol Graffitii studio. Terence and I got to spray paint our team name over one of their canvases. We completed all 12 clues with no penalties and we ran it into the finish line, which luckily was at the bar!
Our finish time was 3:39, only an hour after the first place team finished! We placed 31st out of 268 teams! Pretty awesome for our first urban adventure race :-)
Posted by Debbie at 3:07 PM 1 comment: 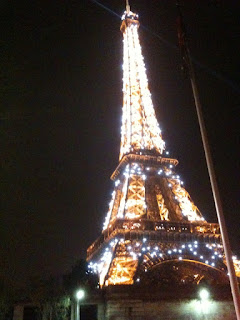 So, the stereotypes have proven true in Paris. Omg, I don't know where to start! But the city is amazing...more metropolitan than I thought, and bigger. Saw quite a bit today, more tomorrow.

Here's a shot from below the Eiffel Tower as Deb and I drank some fine French wine...

Only a day left, Texas is already knocking!

Posted by Terence at 5:42 PM No comments:

Arrived in Paris this morning via overnight train, was an experience like no other...tiny little sleeping compartment...I had the lower, Deb had the upper.

It was sad leaving Germany because we had so much fun there. Had an awesome time at Augustiner for Starkbiefest...we were the only tourists there...drank with two young Germans for a few hours and definitely felt the strength of the beer in the morning. We talked culture, tv, movies, and life...awesome. It was different the next day when deb sat next to a big german ladies man at a outdoor biergarten. Germany was great.

(stories are brief as it's hard to blog on the iPhone!)

Posted by Terence at 5:20 AM No comments: 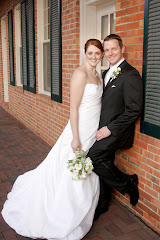